Cover and Blurb Reveal for Any Means Necessary

Hello, everyone! It's great to be back with news on my next release. Any Means Necessary is book 7 in the Fated Hearts Series. It will be the final book in series, although I can say there will be spinoff books in the future. I also plan to share free short stories on this blog with you so that we can keep up with your favorite Fated Hearts characters. 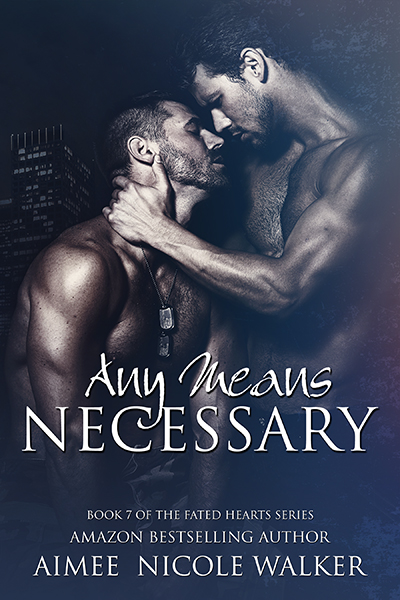 This sexy and stunning photo was taken by Wander Aguiar and this gorgeous cover was created by Jay Aheer of Simply Defined Art. It just makes my heart a gooey mess when I look at it.

Now for the blurb...

I wasn’t proud of the man I’d become – selfish, spoiled, and cynical. Mark Bradley’s reappearance in my life made me want to be a better man. It had been more than two decades since we’d last seen each other and neither of us resembled the kids we used to be. Our lives went in completely different directions and I never thought I’d see him again, let alone hire him as the head of my security team.

The attraction and chemistry between us was immediate and intense, but Mark had built walls around him that I wasn’t able to penetrate. It wasn’t in my nature to accept that I would never have the person I wanted most in life, so I pushed. Mistrust and missteps nearly ruined us before we even had a chance to begin. Then there was the little problem of someone wanting me dead.

Accepting a job working for Mitchell Heston was probably one of the biggest mistakes I’d ever made, but then why did it feel so right? We had nothing in common except a past that neither of us could change. What did I have to offer someone of Mitch’s caliber? He was a wealthy playboy and I was battle hardened soldier with demons that threatened to ruin any chance of happiness for me. That didn’t stop me from wanting him, regardless of the consequences.

None of my doubts mattered once Mitch’s life was in danger. My sole focus became keeping him safe so that we could explore the feelings that were growing between us. To do that, I would sacrifice anything and protect him by any means necessary.

Any Means Necessary is book 7 in the Fated Hearts series and can be read alone or as part of the series. This book contains sexually explicit material and is intended for adults 18 and older.

I am so looking forward to sharing the teasers with you. I'm planning on rolling them out starting on August 9, 2016.

Aimee
Posted by Aimee Nicole Walker at 10:43 AM