Return to Me Cover Reveal, Blurb, Excerpt, and Release Date!!!!!!

Happy Valentine's Day to you all. I couldn't think of a better day to reveal the cover, blurb, and give you a excerpt of Return to Me. 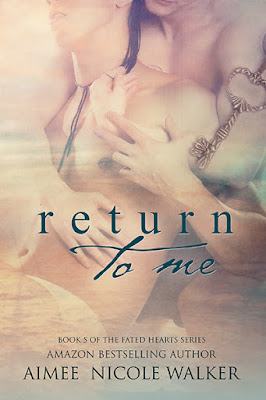 Now for the blurb:


Does the heart have a memory?
Noah McKinney and Maverick Rodriguez met when they were seven years old. Maverick’s family moved into the house next to Noah’s aunt, where Noah spent every summer of his childhood. During those three months every year, the boys were inseparable as they swam in the waters of coastal North Carolina, rode bikes, told ghost stories, and dreamed of finding hidden pirate treasures. A sweet friendship developed into an even sweeter young love, but then Maverick disappeared out of Noah’s life as suddenly as he appeared.
Twenty-two years later, Noah returns to Beaufort, North Carolina after he receives a call that his ancestral home has been vandalized. He is overwhelmed with a feeling that fate has something more up her sleeve than a simple home repair, but never in a million years would he have guessed what was waiting for him.
Maverick has returned to Beaufort in an attempt to stop running from his past and what better place than the source of his happiest memories. He quickly earns a reputation as the best in the business at restoring old homes to their former glory. No matter how successful his business has grown, he still feels there is something missing in his life. Or is it someone?
Noah and Maverick’s reunion is nothing like either man has fantasized about for so many years, but beneath the strain is an undeniable attraction and a feeling of rightness that neither man can deny or resist. However, giving in to their desires doesn’t erase their doubts and fears. Maverick knows that nothing of the boy Noah loved remains inside of him. He thinks he’s better as a memory than the man he’s become. Noah fears that Maverick will disappear again and doubts he could survive the heartbreak a second time.
The heart wants what the heart wants and it won’t be denied.
Can the two men overcome their fears and doubts to take a chance on a love that promises to burn brighter than the sun? Or will they use the obstacles they face as excuses to spare themselves from potential heartbreak?
Return to Me is the fifth book in the Fated Hearts series. It can be read as part of the series or as a standalone novel.
*This book contains sexually explicit material and is intended for adults only.
And finally, the unedited excerpt from Maverick's POV:
Noah was standing waist high in the water with his back towards me. He was throwing a tennis ball into the water and cheering on his dog while she retrieved it. “Atta girl, Madge. That’s daddy’s good girl.” Madge? I suddenly remembered how much Noah loved Madonna and I smiled at the name he chose for his dog. I was certain it wasn’t a coincidence.
I sat down on the porch steps and watched them play together for what seemed like hours. I could’ve called out to them and made my presence known, but instead I chose to observe. The memories I tried so hard to repress came rushing back at me one right after the other and it left me feeling dizzy. I closed my eyes and tried to will away the agony of loss that accompanied my memories. I had just about gotten myself together when Noah walked out of the water like some beautiful mythic God.
Even in the fading sun, I could see how perfectly his tall body was sculpted. I was jealous of the water that cascaded off of his body and I itched to run my hands over his lean muscles. Man and beast shook off the water and then flopped on a towel to look at the ocean. Did the water still make him feel small and insignificant? He often said that when we were kids.
I never thought of him as insignificant and I always told him so. The various smiles that he would give me flashed through my mind. First there was the gap tooth smile at age seven, then there was his brace face smile at ages eleven through thirteen, finally there was the prettiest smile I had ever seen once his braces were removed. I loved each and every one of the smiles he gave me and I had sorely missed his sunny disposition during the years I had been without him.
It wasn’t long before Noah and Madge headed back to the house. I stood up then, because I didn’t want to make it too obvious that I had been spying on him for so long. By this time, dusk has started to fall so I was sure that I wasn’t much more than a silhouette on his deck. Still, I knew the moment his eyes met mine in the semi-darkness that he knew who I was. Madge’s fur stood up on her back, but Noah reached out and placed a calming hand on her head.
Did the heart have a memory? If so, it had a very long one and my heart thumped to a staccato beat that it only played for him. I was starting to sound like some sappy-ass line in a cheesy soap opera, which annoyed the fuck out of me. I felt his eyes on me, sizing me up, and possibly judging me. Did I measure up to his expectations?
He stood in front of me and looked into my eyes searchingly. His eyes were exactly as I remembered them, a unique mix of blues and greens. He offered me a timid smile before he said, “Hello, Mav.”
Release Date:
Noah and Maverick are coming to a kindle near you on March 29th!
Thank you so much for stopping by my blog to check out Noah and Maverick. Teasers will be staring really soon!
XOXO
Aimee


Posted by Aimee Nicole Walker at 7:40 AM