Hello everyone. I must apologize for my absence, but it was for a really good cause. I have finished book 3, Surrender Your Heart, and it is currently undergoing second round of edits. Below is the beautiful cover created by Jay Aheer of Simply Defined Art. I've also included the very first teaser that Jay also created. 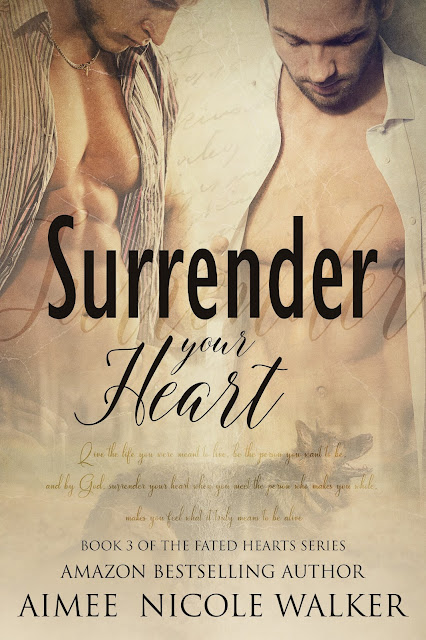 Isn't it beautiful? Now for the first teaser... 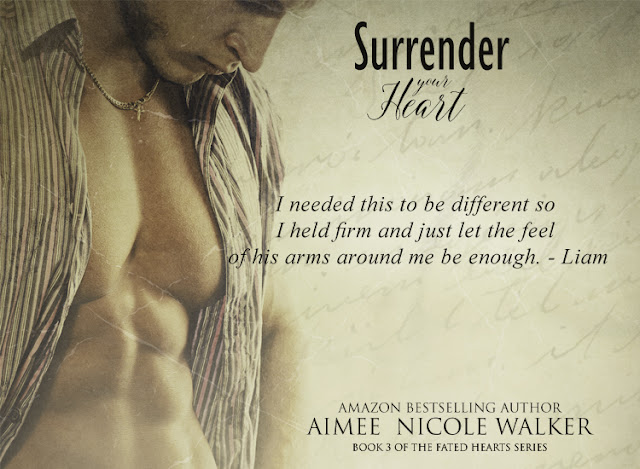 Now for the blurb! It might get fine tuned a bit between now and release day, but I wanted to have something to share.


Secrets and fear… Everyone knows them; Jack Murphy and Liam Connelly are no exception.
A secret brings Liam Connelly to D.C., but what he discovers upon his arrival is so much more than he expected. Hired to tend bar at Bottoms Up, Liam finds himself drawn to his enigmatic boss like a moth to a flame.
Jack “Dragon” Murphy dedicated his life to serving his country, but PTSD forces him into retiring earlier than he planned. Jack sets about building a new dream with the love and support of his family, friends, and his loyal service dog, Charlie. Bottoms Up becomes his new beginning and his solace from the inner turmoil caused by the secret he has been hiding for twenty years. A secret he is able to deny until he hires a captivating hazel-eyed Liam.
Jack is rocked by the death of the man he respects above all others. His loss brings about a new discovery in the forms of a letter and journals, making him realize that things aren’t always what they seem.
Fear of rejection keeps Liam from revealing the truth of why he came to town and guilt is eating him alive. He’s built a new life with wonderful friends and losing all of it seems like more than he can handle. He turns to the man who has come to mean so much to him only to learn that he isn’t the only one hiding a secret.
Jack wants Liam more than his next breath, but can he take the risk of losing everyone he holds dear; to take that leap that will either bring him happiness or cause him to lose the one person who makes him feel complete?
Jack and Liam join forces to find closure for Jack’s lost hero and learn a lot more about themselves and each other along the journey. Will these two men find a future together or will outside forces keep them apart? Are they brave enough to surrender their hearts to one another or will fear break their bond?
Surrender Your Heart is the third book in The Fated Hearts Series. It can be read as standalone book, but has many characters that have been introduced in Chasing Mr. Wright and Rhythm of Us.
As always, thank you for stopping by my blog and for your continued interest and support of my work.  Love you all!
XOXO
Aimee
Posted by Aimee Nicole Walker at 7:42 AM