Rhythm of Us Blurb and Teaser

There are six weeks until Rhythm of Us goes live!!  I can't wait to share Xavier and Ben's story with you on September 8, 2015. Below is the blurb and the first official teaser.  I hope you enjoy!


Xavier Cruz has come home after touring with his band for eight years, a life his family and friends would never envy if they knew the truth. Haunted by past decisions, he’s lost himself and his music. Every day is a struggle to recapture them both and forgive the mistakes he’s made. Can Xavier push past his nightmares and hear the melodies all around him again?
Ben St. Claire has thought about the charismatic Xavier Cruz for the past year, but the man who has come home isn’t the same man who left. Watching two of his friends fall madly in love and fight to be together leaves Ben’s heart yearning for his own special someone. But can he fight another man’s battles so they can live in harmony?
Xavier feels things for Ben that he’s never felt before and it scares the hell out of him. How can he trust anyone else when he can’t trust himself?


Rhythm of Us is the second book in The Fated Heart Series. This book can be read as a standalone book, but has many characters that have been introduced in Chasing Mr. Wright.


**This book contains explicit sexual acts between two men. This book also contains situations that may be triggers for some readers. 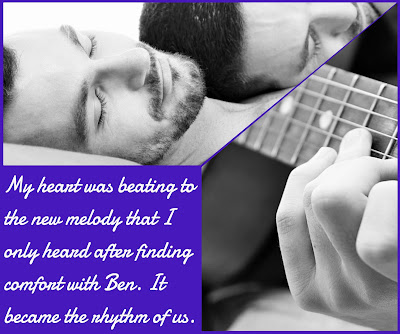 I will roll out a new teaser every Tuesday leading up to release day. Thank you for all of the questions and interest on the release of this book. You all give me the warm and fuzzies and I love you!
XOXO
Aimee


Posted by Aimee Nicole Walker at 6:51 AM